The New York Times - Albania: Budget destination of the year 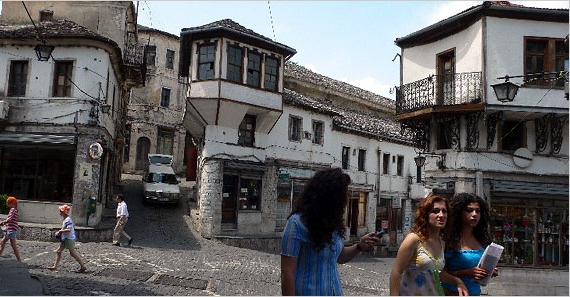 Gjirokaster is a bustling town of hilly, slippery cobblestoned streets and slate-roofed Ottoman houses.
NOT long ago, to suggest Albania as a destination of any kind, even a frugal one, would have been the height of chutzpah. Within five years of Albania’s abandoning Communism in 1992, a Ponzi scheme destroyed the nascent market economy and widespread rioting turned Albania into a byword for rampant lawlessness. It was not, except for aid workers and smugglers, on anyone’s map.
The Best of 2007

The best destinations of the year, from budget to family-friendly.
The New York Times

In the last several years, however, Albania has made enormous strides in democracy and development — and revealed itself to be not only ripe for tourists, but affordable to boot. The capital, Tirana, with its brightly painted apartment buildings and molto Italiano cafe culture, is a fantastic starting point, especially since it’s hard to spend more than $15 a person at the city’s nicest restaurants. But it’s the southern part of this Balkan country that holds the most intriguing sights and bargains.

Start in Gjirokaster, a beautifully warped city that produced two of Albania’s most important 20th-century figures: Enver Hoxha, the country’s dictator for 40 years after World War II, and Ismail Kadare, the novelist perennially mentioned as a Nobel Prize candidate. Gjirokaster is built on slippery, cobblestoned hills so steep they seem to defy human habitation, yet the town of stately slate-roofed Ottoman houses bustles.

One house, now an Ethnographic Museum, happens to be Hoxha’s birthplace. Another is the Hotel Kalemi (355-84-63-724; hotelkalemi .tripod .com), where for $40 a night you can sleep under a carved-wood ceiling that’s 200 years old.

During the day, your legs will get a workout wandering the streets and exploring the massive fortress overlooking the city. At night, recuperate with roast tongue of veal and yogurt soup at the friendly Festivali restaurant. And don’t leave Gjirokaster without a handmade carpet from Ruha’s shop (355-69-254-2122); they start at $40.

Your reward for enduring Gjirokaster’s hills is Sarande, a busy port on the Strait of Otranto. At the Hotel Kaonia (355-85-22-600), right on the boardwalk, a simple but modern double room with great water views runs just 30 euros ($40 at $1.36 to the euro).

The pebbly beach in the center of Sarande may not be too exciting, but there are white sand stretches nearby, including the popular beach at Ksamili, 10 miles to the south. And if you’re hankering for a taste of classical Europe, the Greek island of Corfu is a quick hydrofoil ride away.

Southern Albania’s greatest treasure, however, is Butrint, a 2,500-year-old city that was inhabited by successive generations of Illyrians, Greeks, Epireans, Romans, Byzantines and Venetians, before dwindling to a tiny fishing village in the late 19th century. It’s the kind of place where history is still waiting to be discovered.

Situated on a hilly, forest-shrouded promontory south of Sarande, near the Greek border, Butrint (a Unesco World Heritage Site) was first excavated by Italians in the 1920s, who unearthed an amphitheater and Greek-built walls. Archaeologists later discovered early Christian basilicas, a baptistery and as many as eight bathhouses.

Butrint is large — about 11 square miles — and still shrouded in mystery, so you’ll want a guide. Vasil Barka (355-69-227-6460) has 25 years of experience and knows where to find Cleopatra’s name in a string of Greek letters on a huge stone block outside the amphitheater. In the basilica, where the frescoed floor is covered in sand to protect the tiles from the elements, he knows just where to brush aside the grains to reveal a spectacular red-and-blue bird.

And at the Venetian fort-turned-museum, he can tell you which statues have just been dug up and which recovered from looters.

Like Albania itself, this lost city harbors untold treasures for the intrepid — and at a price that just about anyone can afford.